Carol's parachute jump took place on 21st October 2006, at the Devon & Somerset Parachute School at Dunkeswell, near Honiton in Devon. It was a tandam jump meaning that the poor thing had to be strapped to some strange man.

This was 5 years since we all said goodbye to Alisha and at the time we'd recently opened an "Angel Fund" for Alisha - all the money still goes directly to the Jennifer Trust but "counts up" in memory of Alisha. When we raise £5000 in this fund, a star will be officially named after Alisha as a lasting tribute.

I'm pleased to report that Carol's jump went successfully - she's still with us!

There was bad weather on the day, a combination of cloud cover and winds over 20 knots. Neither are allowed for a good jump. After the initial brief in the morning the plane did manager made two "lifts" in fairly quick succession. Each lift takes two jumpers up and out as the plane (as Cesna something or other) is pretty small!

Then the weather closed in again, and there was either too much wind or too much cloud for the rest of the day, so Carol had to wait. And wait...

As the day wore on, more and more people left, unable or unwilling to wait any longer for their jump. Finally, just after 5:30PM (having arrived at 8:30AM) the final wind reading was taken with only Carol and one other jumper (Charles) remaining it was suddenly on - woohoo!

The light was fading, so it was all a rush. Immediately then, Carol rushed to the toilet... But she came back again pretty swiftly. 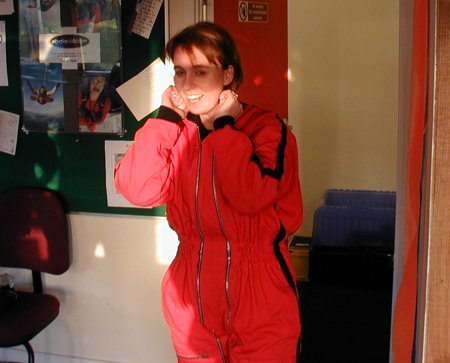 Does this need earrings? 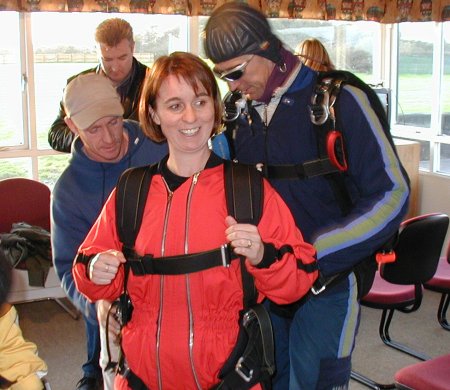 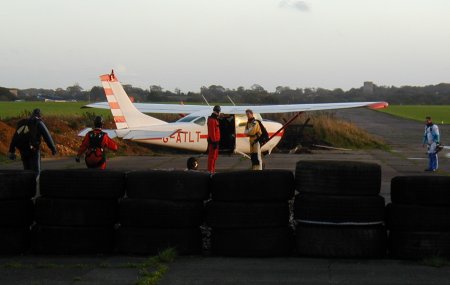 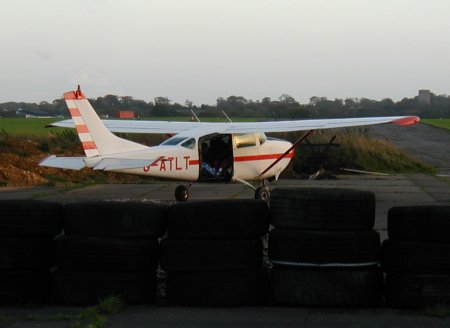 You're going to shut the door, right?

And no, they didn't shut the door. It stayed open for the first 1000ft of the climb with Carol a good few inches away (strapped in though)...

At 9000ft they opened it again and so after 20 minutes of climbing up to altitude, she's ready to jump out of that perfectly servicable aircraft. At 10,000ft up. I'd be scared at 10 ft myself. 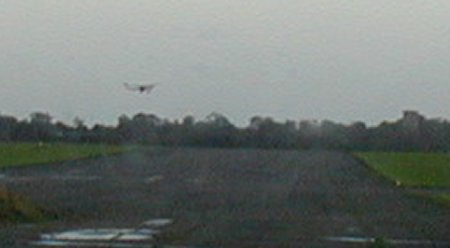 Although it was just edging towards getting dark, with the red of the setting sun visible on top of the clouds, I could just make out the little silouette of the plane. And then see her (or rather a dot) dropping like a stone out of it. After a few seconds (45 or so apparently) the chute opened and she began a more steady descent. 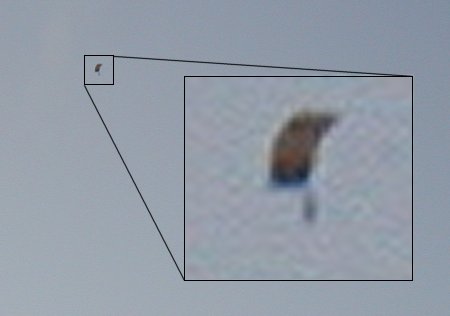 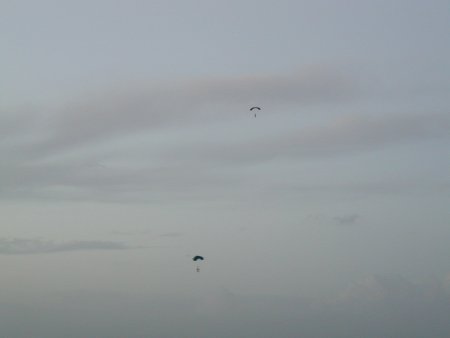 She's supposed to be near the camera! Apparently after the 'chute opened there was a big gust of wind. So she's off to some farmer's field for a long walk back to the parachute centre. They did send the car out, but it came back with the parachutes and gear and left Carol to walk back with her co-jumpers! 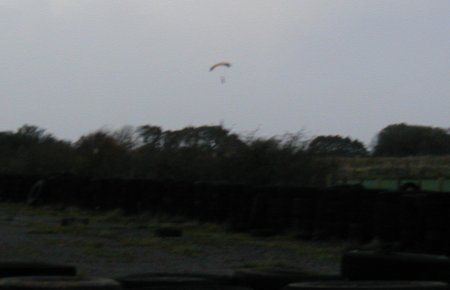 About the wait: Were you nervous? "I was convinced it wasn't going to happen, but excited in case it did.".

On hearing it was going ahead? "I wanted a wee!"

Going up in the plane? "I was excited and surprised by how relaxed I was feeling. I enjoyed watching the sunset on the way up, against the Devonshire coastline."

When the door opened? "I knew there was no going back, without dropping? The free fall was the best bit - absolutely fab - difficult to breathe to start with. There wasnt' a sensation of falling, more of being cushioned by the air - amazing."

Landing? "I enjoyed drifting down on the parachute and a smooth landing in a farmer's field. I'd do it again! Thank you to everyone who sponsored me!".