Abseiling.. before and After

Harry abseiled 450ft down Guys Hospital Tower on 24th May 2008. Here's his thoughts before and after...!

It's about 450ft I'm told. Well I've counted about 22 sets of windows in that picture and I don't think that's all.

This is the Guy's Hospital Tower in London. I'm going to walk down the outside of it. Apparently it's one of the tallest venues in the UK for such foolishness and stands taller than the London Eye. Here's a photo of someone else doing it, to give you an idea of the view from top: 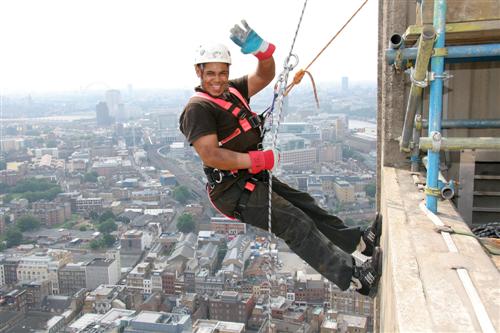 OK, so I don't like heights. I don't even like parking at the top of a multi-story car park. Still, all fears have to be faced sometimes (well, perhaps not all of them, after all, there's some really horrible horror movies...)

So, er, please sponsor me. Lots. You know it's for a very good cause!

Well that wasn't fun. I'd love to say it was ... but well let's say that I'm not going to repeat it!

Here's the picture of me at the top, just about to lean back and start the abseil proper. 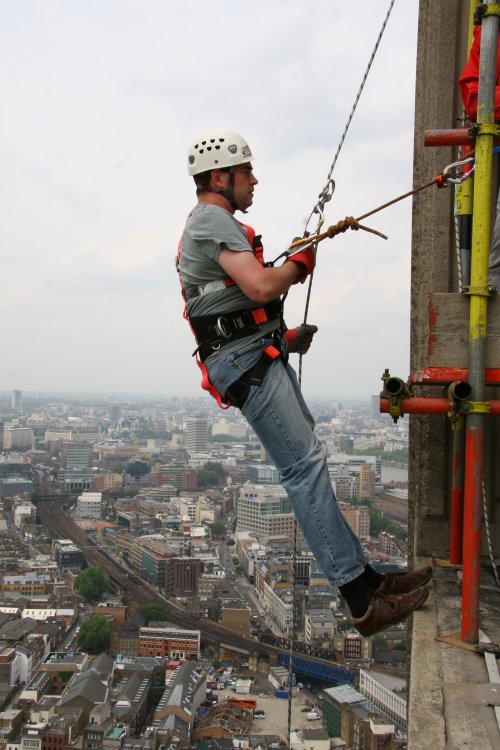 Prior to this, on arrival at Guy's Hospital, I'd been up 5 stories in the lift and from there on to a flat roof which marks the bottom of the abseil. Hey great- that's five floors I don't need to do. But then looking up, you see this enormously tall tower and think .. "Oh s--t".

Then it starts getting very serious. Back down to the ground floor and then up in the lift... and up... and up...

Then it's up another 2 or 3 floors on the stairs because, 30 floors up just isn't high enough. I was starting to feel sick at this point and studiously trying to avoid looking out of the windows and failing even that. So up into the service tower we go. Surely this doesn't really need to be anything more than one floor?

Then we're at the training set up, and I must say, that's not too bad. I'm up there with three girls who are hopefully going first.... We're shown how to operate the ropes and it all seems very straightforward. Perfectly sane in fact. Thinking about it, there wasn't a window to be seen here, so that must be why.

Then, up yet another bloody flight of stairs and out of the the little metal topped staircase and out onto a platform probably about 4 by 8 metres in size. I gave up any silly attempts at banter because I just didn't feel like it. "Have a look round, enjoy the view"... yeah right. "Wow, look a peregrine falcon". Don't care.

The three girls went before me, and another chap arrived to go after me. The rope from the last descender started getting pulled back up, and I realised that meant I was going to get called forward.

Onto the cheery little scaffolding platform. The first rope is clipped on but in order to get onto the rope that you actually feed through there is no choice but to walk (backwards, and very slow & reluctantly) right to the edge and grab hold of the scaffold pole right on the outer edge . Yes, Harry, you really do have to walk right to the edge of 450ft drop... I was hanging on for grim death! Did I mention I hate heights? 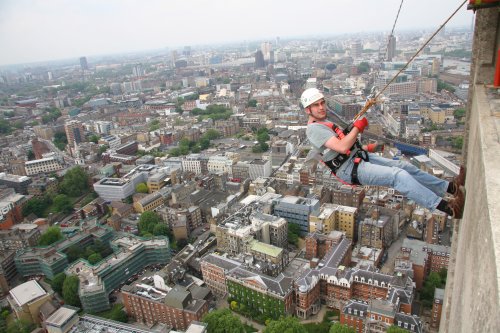 Anyhow, I did somehow manage to do get to the end, and then climb down a few feet onto the starting ledge. Before I really had time to think about it, I was merrily (not) on my way. The picture above might give you some idea of just how high up this buidling is. I would have been scared enough abseiling down any of the "tiny little ones" at the bottom. You know, the ones with 7 or eight floors. How on earth did I ever tell myself that this was a good idea? 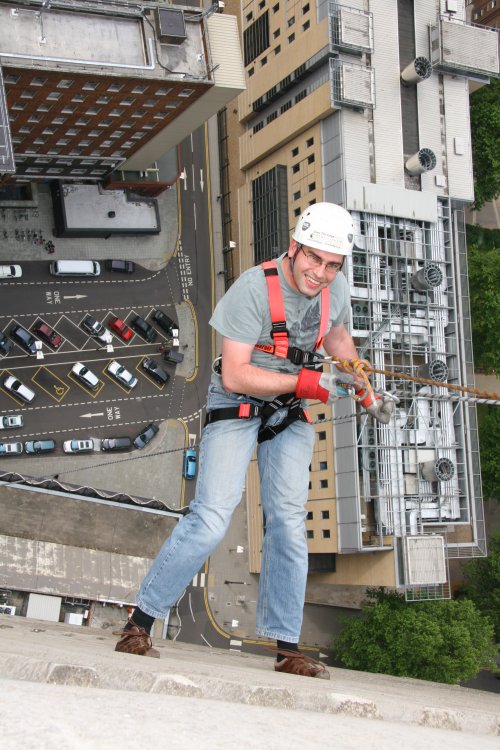 This final pic is a few floors down - aren't photographers clever? How I was (sort of) smiling in this I don't know. Just above my right shoulder (on the left of the pic) you'll see a little metal square. That's the top of a lamppost with Carol videoing underneath. She's very small isn't she?

The first few floors are the worst and you actually have to work to feed the rope though. About two thirds of the way down, I though I should really be brave enough to look down. Hmmm, amazing what stupid thoughts you have isn't it?

By this time, the abseil is very easy and it's more a case of being careful not to go too fast. Which I just about did, as there was no way I wanted this to take more time than it had to.

Anyone got any good ideas for fundraising on the ground?

Final note. Seriously - thank you to everyone who pledged to support me on this, it's looking to be around £800 plus the gift aid. Tremendous. Thank you!